How to Layer Glitter Heat Transfer Vinyl With Silhouette Studio

The manufacturer lists Glitter Heat Transfer Vinyl as top layer only, meaning you can't layer glitter HTV, but it is possible to get the look of glitter on glitter with this simple trick! 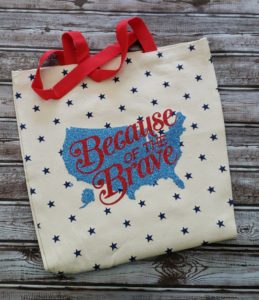 Open Silhouette Studio and pull in your multi-colored design (hence the need for layering). We used the Because of the Brave design in So Fontsy's Hero Bundle! It's easiest if you fill the design with the same color HTV you're going to cut with. If it's not already, drag the top layer over the bottom layer and position it exactly where you want it. Open the Modify panel from the right sidebar. With both layers selected, click "Subtract All".

Move the top layer out of the way (in this case, the lettering). By subtracting all, you've removed the shape of the top layer from the bottom layer. This will allow you to put both layers directly on the bag, shirt, etc. while keeping the look of layered HTV.

If you decide to resize from this point going forward, make sure to select both layers at the same time and or the overlap won't fit directly into your cut out! 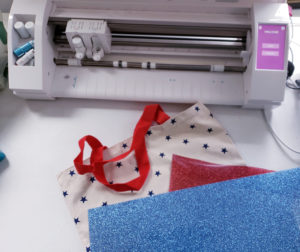 Cut the design on Glitter HTV as you normally would and weed away the excess vinyl. Since we're using two colors of HTV, we have to press two times. It doesn't matter which layer you press first, but we pressed the bottom layer first (blue glitter in this case) for half the suggested time, removed the carrier sheet, and then lined up the second color (red glitter), pressed for the full suggested time, and removed the carrier sheet. https://youtu.be/6YdXSUVI1nc That's the simple trick to get the look of layered Glitter HTV!